Forgotten Roots of the Nordic Welfare State in Protestant Cultures 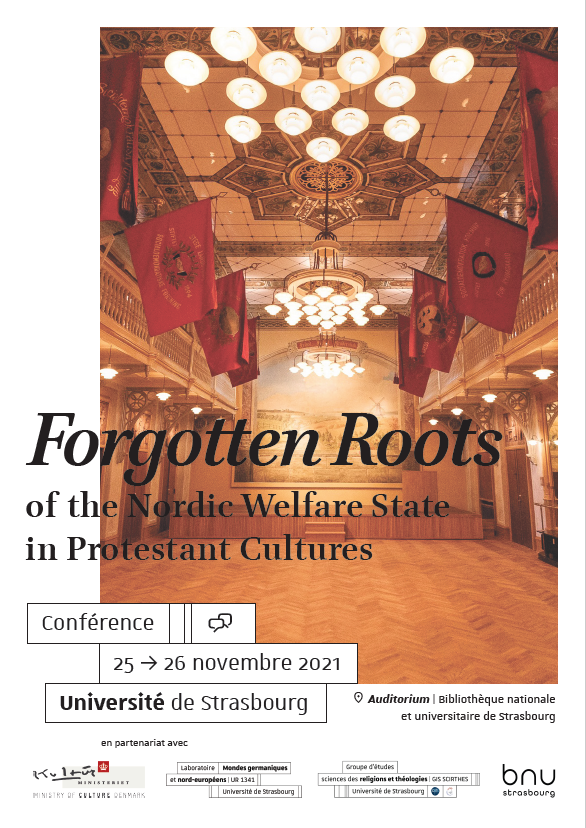 The conference will be streamed.

To attend, it is necessary to register at
https://www.bnu.fr/fr/evenements-culturels/agenda-culturel/les-racines-oubliees-de-letat-providence-nordique-dans-les-0

In recent years, the Nordic welfare states have been celebrated around the world in surveys of social trust and happiness. In fact, according to the political economist Francis Fukuyama and many others, other states should learn from Nordic nations how to build democratic and egalitarian societies. However, what exactly should be learned? In order to identify the central elements, the success of the Nordic welfare states has so far mainly been studied from sociological and economic perspectives as a product of the Nordic welfare states itself. Yet it has proved difficult for other countries to adopt Nordic social institutions and, in this way, to generate greater social trust. It seems, that these institutions have a longer, more complicated history that should, as we suggest, even be understood in terms of cultural and religious history. On the other hand, the historically and culturally focused research on the Welfare state has typically followed a narrative of secularization of society, identifying the Nordic Social Democratic parties as its main agents, even if for example in a Danish context, the importance of the work and initiatives of N. F. S Grundtvig has been discussed, but seldom as part of Christian endeavors and so far mainly restricted to this specific type of Protestantism (Thorkildsen 1997). It seems, though, that cultural research has been religion blind all too long (Hammar 2000). Some of the most significant actors of the “Scandinavian Sonderweg” have been Pietist and Pietist inspired pastors and Lay-Christians (Witoszek 2011) and frequently the innovative visions of improved orders and modern welfare have also been produced in but also through integration processes with other religious traditions, e.g. Catholicism and the Jewish tradition.
In the frame of our research project on the Aesthetics of Protestantism in Northern Europe (Basel, Freiburg, Strasbourg), we organize an international conference that shall investigate the role of the intricate history and heritage of Protestantism as articulated in the multiple revival movements, state Protestantism, cultural Protestantism, spiritualism and atheism as part of history of present-day Nordic conceptions of welfare and happiness. We want to look on it from the perspective of cultural, literary, political and other branches of the study of cultural history and focus thereby focusing on the Aesthetics of Nordic Welfare state as integrating forms.
In consequence, we are particularly interested in papers that study mutual negotiations of profane and sacral, protestant and secular ideas, practices and aesthetics, taking cultural products as its research objects that seek to bridge or camouflage tensions and interactions between religious and secular aesthetics and ethics. In this context, Henrik Pontoppidan’s Lykke-Per (1898-1904/05),
Ellen Key’s Barnets Århundrade (1900), Aksel Sandemose’s En flyktning krysser sitt spor (1933) can be cited as works that, in spite of palpable interest in religious and ideological diversity, are governed by Protestant traditions of multiple kind, traditions that they transform into their visions of what constitutes collective and individual welfare and happiness in the modern world.

9h-9h45 Vigdis Berland Øystese (Bergen): The role of hymns in the shaping of a new church and a new state

14h00 Maria Hansson (Paris-Sorbonne) : The Fantastic in the Nordic Welfare State. Secularisation and Rationalisation in Let the Right One In by John Ajvide Lindqvist